Recalling our tour of Israel and Jordan in May 2017.

It’s 12 months today since our group took off from Perth for Israel and Jordan.

You visualize the Bible narratives in fresh ways after you’ve been there.

Lambert recently shared his 40-minute video of the trip in the Israel 2017 Facebook group. Siew Ho shared his longer version on DVD.

If you’d like to relive it, here’s our summary of each day: END_OF_DOCUMENT_TOKEN_TO_BE_REPLACED

Ponder what we’ve seen in the last two and a half weeks.

As you read this, the tour group from Riverview are probably on a plane flying back to Australia. We’re reflecting on what it’s meant to visit key places in Israel and Jordan where so many significant events in Biblical narrative played out.

Next week this blog returns to normal — seeking to understand the Gospel of Matthew from the perspective of the kingdom of God, Jesus central lens.

Moses was unable to lead Israel into Canaan, but he glimpsed the land from Mount Nebo east of the Jordan River.

Tomorrow we travel through ancient Moab, originally descended from Lot (Genesis 19:37). The Moabites tried to prevent Israel entering the Promised Land. They hired Balaam to curse Israel. When that failed, they beguiled the Israelites to turn from God (Numbers 22 – 25). Nevertheless, Ruth from Moab became David’s great-grandmother (Ruth). END_OF_DOCUMENT_TOKEN_TO_BE_REPLACED

Petra is one of the wonders of the ancient world.

The iconic buildings at Petra were built by the Nabateans in the second century after Christ, but the Edomites lived here among the rocks long before that. END_OF_DOCUMENT_TOKEN_TO_BE_REPLACED

We cross into Jordan to journey northwards on the eastern side of the Salt Sea — the route Moses took when leading Israel to Canaan shortly before his death.

A wadi is a streambed that flows only in the rainy season. At the end of the Sermon on the Mount, Jesus warned about the foolish person who built his house on the sand rather than on rocky terrain. Then when the rains came, the house on the sandy floor of the wadi didn’t survive. Jesus’ way isn’t the easiest, but it is the most enduring for those willing to follow (Matthew 5:24-27). END_OF_DOCUMENT_TOKEN_TO_BE_REPLACED

The Judean Wilderness beside the Salt Sea reveals how Jews tried to keep their history alive when Rome invaded in AD 70.

In the dry and rugged terrain of the Judean wilderness, it’s not hard to see why David would have taken advantage of the spring at Ein-Gedi while hiding out from Saul (1 Samuel 23:29).

Jesus was baptized by John in “the wilderness of Judea” (Matthew 3:1) at “Bethany beyond Jordan” (John 1:28). While we’re not sure where that was, it sounds like the Jordanian side of the Jordan, opposite the Judean wilderness, perhaps across from Qurman. (Others have wondered if it may have been further north, just a few kilometres south of the Sea of Galilee.)

The Dead Sea Scrolls were discovered in the caves at Qumran. The Qumran community thought the Jerusalem temple leaders were irredeemably corrupt, so God had called them to be his holy place. Here in the wilderness they saw themselves as a voice calling Israel back to holiness (Isaiah 40:3). They used a miqveh (ritual bath) for cleansing. There are some interesting parallels with John the Baptizer (though there’s no evidence he was an Essene). John used the same text from Isaiah to describe his ministry, and baptized to cleanse people for the Lord’s arrival (Matthew 3 || Mark 1:1-11 || Luke 3:1-22). Offering cleansing in the wilderness apart from the temple was potentially explosive for the son of a priest (Luke 1:5). END_OF_DOCUMENT_TOKEN_TO_BE_REPLACED

Half the world’s population consider the temple area in Jerusalem to be one of the holiest places on earth.

The old city walls we see in Jerusalem today were built by Sultan Suleiman in the 1500s. The only remains of the temple complex are the foundation stones of the Western Wall (previously the Wailing Wall). Please respect this area as a place of prayer. It’s as close as you can get to what was the Most Holy Place—the place of God’s abode on earth in Old Testament times. Here you will see Jewish people with a wide range of beliefs. Some may wear phylacteries—literally tying Scripture to their foreheads (Deuteronomy 6:8). You will see written prayers pressed into the spaces between the stones. END_OF_DOCUMENT_TOKEN_TO_BE_REPLACED

In Hebrew, Friday is called “Preparation.” Jewish families do the necessary preparation to avoid working once Sabbat begins at sunset.

King David was born in Bethlehem, as was his most famous descendant — Jesus.

Jericho was Israel’s first victory in capturing the Promised Land. Its protective walls fell (Joshua 6). It was also where Jesus healed a blind beggar and invited himself to Zacchaeus’ house (Luke 18:35 – 19:10). Jericho was his last stop on his final journey to Jerusalem.

At the start of his ministry, Jesus had faced the tempter in the Judean wilderness. From a high mountain he had been offered all the kingdoms of the world (Matthew 4:1, 8). We can’t be sure where this mountain was, or if it should be understood as a visionary experience. The crucial thing was that Jesus was tempted to collude with evil, but chose a much more difficult path by which he was given “all the kingdoms of the world and their glory” — the path of the cross.

Bethlehem today is in Palestine. Rachel was buried here (Genesis 35:19). But it’s real importance was as the birthplace of King David (1 Samuel 16:1-13). God promised David that his son would always reign (2 Samuel 7:12-16), so all the kings of Judah were descendants of David of Bethlehem. END_OF_DOCUMENT_TOKEN_TO_BE_REPLACED

For 3,000 years, what happened in Jerusalem has impacted the rest of the world.

1000 years before Christ, King David’s army captured the hilltop fortress of the Jebusites and converted it into “the city of David.” He repaired the supporting terraces (“millo”), fortifying the city to make Jerusalem Israel’s capital (2 Samuel 5:1-12 || 1 Chronicles 11:4-9). There Solomon built the temple on Mount Zion (1 Kings 5–7 || 2 Chronicles 3–7). END_OF_DOCUMENT_TOKEN_TO_BE_REPLACED

We’re about to enter Jerusalem, focusing on the last hours of Jesus’ life. 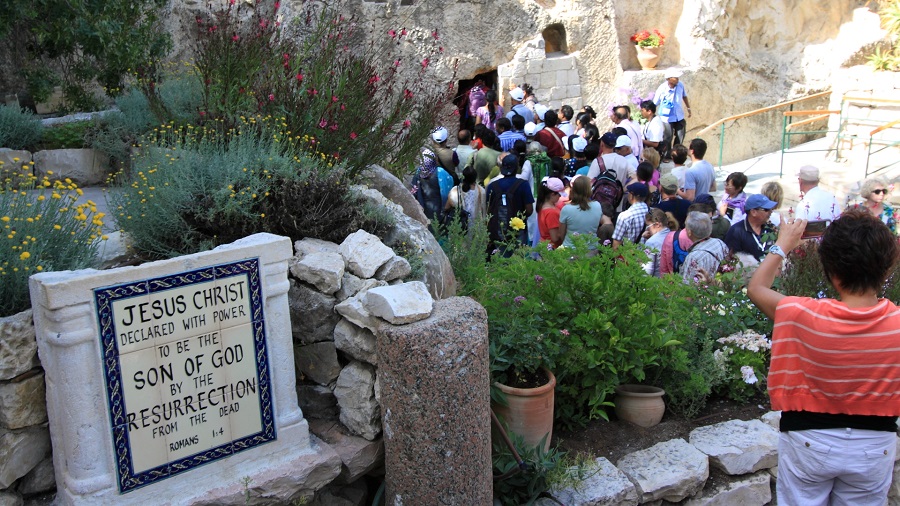 The beautiful Jezreel Valley in central Israel has some important history.

That bump on the map of Israel’s coast is where Mount Carmel meets the sea. It’s a ridge around 10 kilometres long, with the modern city of Haifa to the north, and the verdant Jezreel Valley to the east. This is where Elijah called down fire from heaven to show King Ahab and Queen Jezebel that there was only one true God who ruled Israel (1 Kings 18). From the top of Mount Carmel you can see the hills of Nazareth in the distance. END_OF_DOCUMENT_TOKEN_TO_BE_REPLACED

Visit the hills of Galilee with us.

Pilgrims like us have been visiting Galilee for so long, that all sorts of traditions have developed. Based on the New Testament, we have no idea who Mary’s mother was, or where she came from. We don’t know where the angel spoke to Mary: the tradition that it was by the well probably reflects an expectation that that’s what women did. There’s a long-standing tradition that Mount Tabor was the “high mountain” where Jesus was transfigured (Mark 9:2) but that’s unlikely: there was a Roman garrison stationed on top of that mountain in the first century. The Gospels just weren’t that specific about these details. Southwest of Tabor is Nain where Jesus raised a widow’s son back to life (Luke 7:11-17).

Jesus’ first miracle was providing wine for an embarrassed couple at Cana (John 2:1-12). Six stone jars, each holding 75–115 litres equates to 600–900 bottles of wine! That’s quite a party! The groom was responsible for the wine, but why did Jesus tell his Mother that his time hadn’t come yet (2:4)? Jesus also healed the son of a royal official here (John 4:46-54). It was Nathanael’s home (John 21:2). END_OF_DOCUMENT_TOKEN_TO_BE_REPLACED

This was where Jesus asked his disciples about his identity. 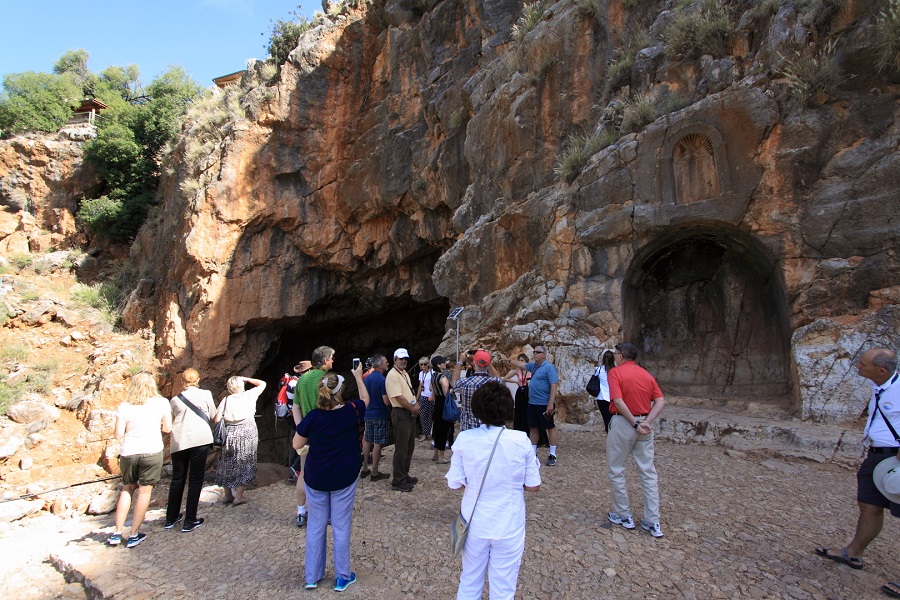 Why would Jesus take them to this spot? How would this location cause them to evaluate Jesus in relation to other powers—political, religious, and spiritual? Hopefully it all becomes clear when you see the place. END_OF_DOCUMENT_TOKEN_TO_BE_REPLACED

Jesus centred his ministry around the northern shores of the Sea of Galilee. 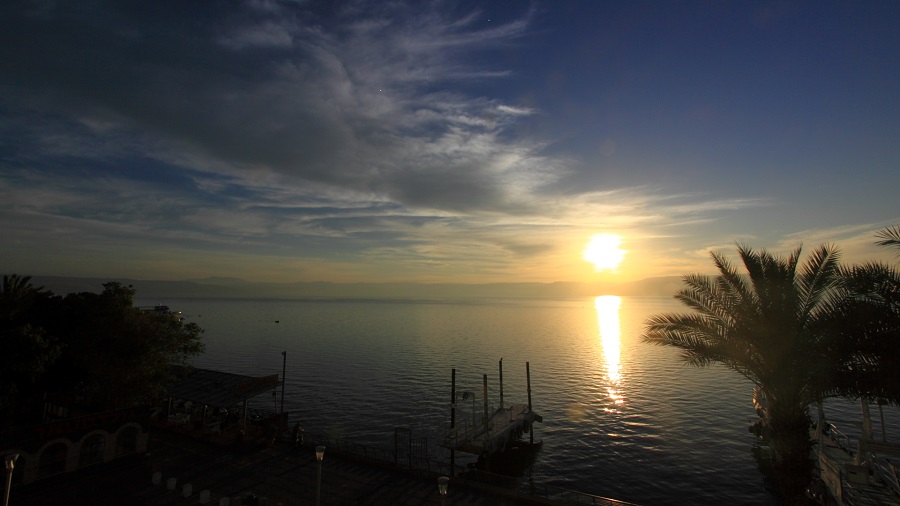 Travel with us as we prepare to land in Jordan, see the Jabbok and Jordan rivers, and make our way to the Sea of Galilee.

To the east of the Jordan River today is the country of Jordan. In Old Testament times, Israel was largely to the west of the Jordan River, so the area to the east was called Transjordan (across the Jordan). The tribes that settled in Transjordan were: Reuben (on the eastern side of the Dead Sea, south of us), Gad (the area we drive through tomorrow), and half of Manasseh (on the eastern side of the Sea of Galilee, north of us). The territory to the east of where we land (Amman) was owned by the Ammonites. END_OF_DOCUMENT_TOKEN_TO_BE_REPLACED

Israel and her setting among the surrounding nations

For the next couple of weeks, I will be in Israel, with a group from Riverview Church. We’ve invited you to join us on-line each day each day as we visit the home of our faith: Israel where it all began.

Today is an orientation. Israel sits in a crucial location where continents meet: Asia, Europe, and Africa. This whole region has always been strategically important, and so it continues to be a trouble spot. END_OF_DOCUMENT_TOKEN_TO_BE_REPLACED

Join us for a virtual tour of Israel, where it all began.

For the next three weeks, we’re pausing our journey through Matthew for a different trip. I’m leading a group from Riverview Church to Israel and Jordan, retracing the history of our faith in the land where it all began. END_OF_DOCUMENT_TOKEN_TO_BE_REPLACED