The Judean Wilderness beside the Salt Sea reveals how Jews tried to keep their history alive when Rome invaded in AD 70. 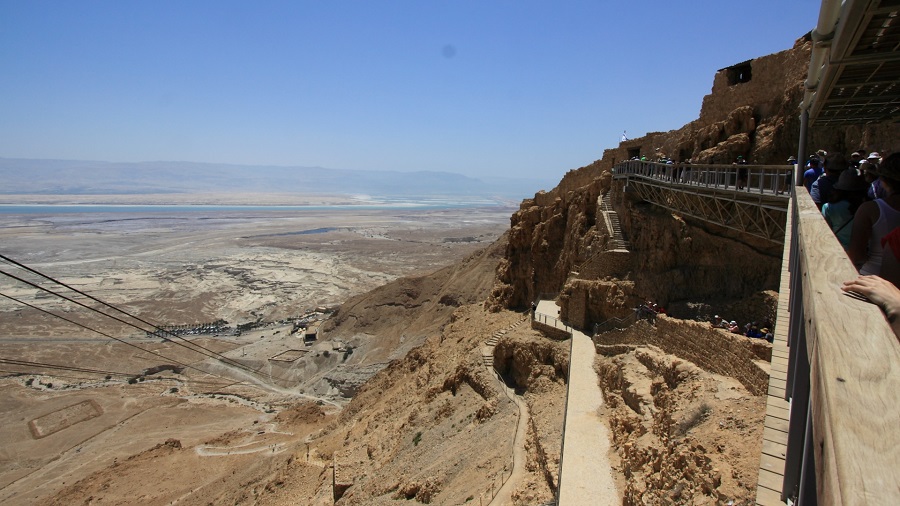 In the dry and rugged terrain of the Judean wilderness, it’s not hard to see why David would have taken advantage of the spring at Ein-Gedi while hiding out from Saul (1 Samuel 23:29).

Jesus was baptized by John in “the wilderness of Judea” (Matthew 3:1) at “Bethany beyond Jordan” (John 1:28). While we’re not sure where that was, it sounds like the Jordanian side of the Jordan, opposite the Judean wilderness, perhaps across from Qurman. (Others have wondered if it may have been further north, just a few kilometres south of the Sea of Galilee.)

The Dead Sea Scrolls were discovered in the caves at Qumran. The Qumran community thought the Jerusalem temple leaders were irredeemably corrupt, so God had called them to be his holy place. Here in the wilderness they saw themselves as a voice calling Israel back to holiness (Isaiah 40:3). They used a miqveh (ritual bath) for cleansing. There are some interesting parallels with John the Baptizer (though there’s no evidence he was an Essene). John used the same text from Isaiah to describe his ministry, and baptized to cleanse people for the Lord’s arrival (Matthew 3 || Mark 1:1-11 || Luke 3:1-22). Offering cleansing in the wilderness apart from the temple was potentially explosive for the son of a priest (Luke 1:5).

Herod built a fortress at Masada where he could escape if necessary. The Jews used the Masada fortress for their last stand after Rome destroyed Jerusalem in AD 70. The Romans built a ramp to retake Masada. Rather than be captured, the 960 defenders took their own lives.

The Salt Sea (Dead Sea) is the lowest place on earth. No water flows out. No salt evaporates, so the sea progressively becomes more salty. The Jordan River’s water is used for irrigation, so the water level of the Dead Sea is falling. From Masada you can see it has divided into two parts.

Ezekiel imagined a day when the Salt Sea would no longer be “dead” but fresh and productive (Ezekiel 47:1-12). He was living in exile after Babylon had destroyed the temple, but he envisioned God living among his people again so that water flowed from his sovereign presence and changed the entire landscape making everything fresh. God’s presence changing the barren world into a fruitful garden—it’s a vision inspired by Eden where water flowed out from the divine presence to water the surrounding garden (Genesis 2:10). It’s a beautiful image of a world restored by God (compare Revelation 22:1-2).

Eilat is Israel’s southern port, on the northern tip of the Gulf of Aqaba (the eastern branch of the Red Sea). According to 1 Kings 9:26, King Solomon sailed a fleet of trading ships from a port city here named Ezion-Geber.

The Israelites probably crossed the Red Sea at the northern tip of the Gulf of Suez, the branch of the Red Sea that is closer to Egypt (Exodus 14-15). The Sinai Peninsula is inside the Y-shape of the Red Sea. Mount Sinai where God established Israel as his nation and gave them his laws is probably somewhere in that peninsula, perhaps towards the south though the location is unsure (Exodus 19–20).