Jesus’ final teaching story in Matthew reveals him as king of all nations, the only leader who can remove what’s wrong with the world and restore God’s reign. 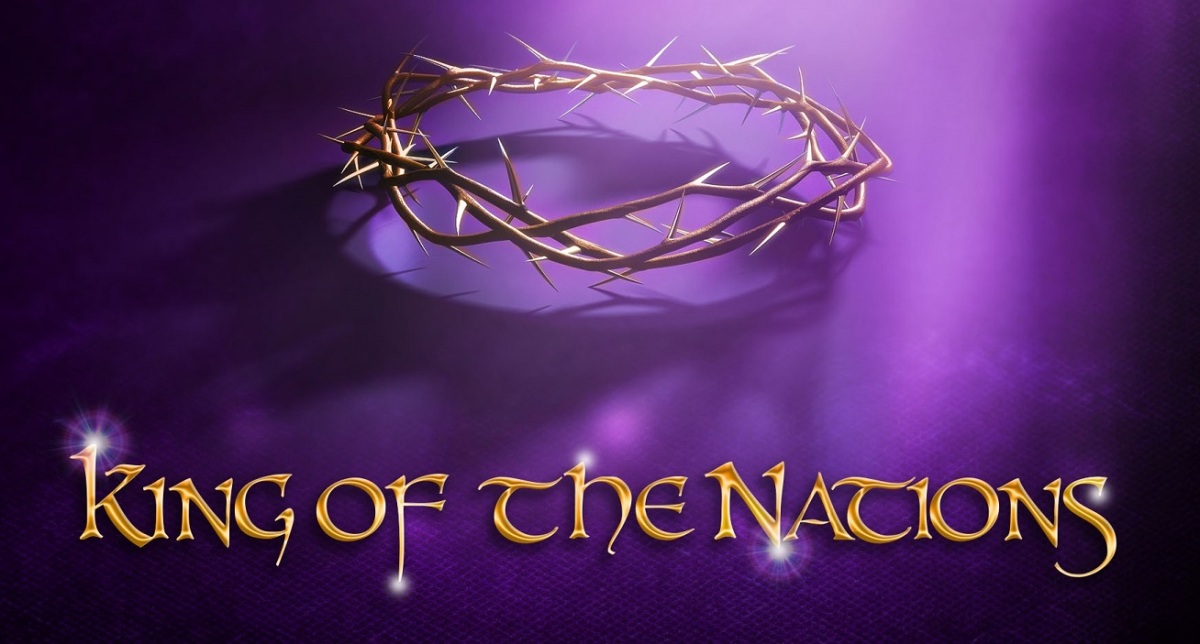 This is the ultimate teaching from Jesus before the final passion narrative in Matthew’s Gospel. Everything Jesus has said about the kingdom of God comes together in this story as the son of man receives the kingship and resolves the justice issues of the world.

This final story contains the most explicit description Jesus ever gave of how he expects humans to live in his kingship. What he expects of his subject is so simple, and his wisdom is so decisive:

Matthew 25:31-33 (my translation, compare NIV)
31 When the son of man enters his splendour and all the angels with him, then he will sit on his splendid throne. 32 The nations will be assembled before him, and he will separate them from one another the way a shepherd separates the sheep from the goats, 33 and he will place the sheep to his right and the goats to his left.

This is a courtroom scene, imagery drawn from Daniel 7 where thrones (plural) were set in place and the Ancient of Days took his seat with the multitudes gathered before him. Earth’s eternal sovereign judges the world’s leaders as unworthy to rule, stripping them of their power. The son of man approaches the bench, and the heavenly court gives him authority, glory and sovereign power; all nations and peoples of every language served him. His dominion is an everlasting dominion that will not pass away, and his kingdom is one that will never be destroyed (Daniel 7:11).

The son of man has been given the responsibility to sort out all the injustices on earth. In the words of John the Baptist, he is sorting the wheat from the chaff, so every tree that does not produce good fruit will be cut down and thrown into the fire (Matthew 3:10, 12).

This has been Jesus’ message too. God’s anointed ruler has come to the capital to confront the fake rulers (hypocrites) (23:1-39), declaring that the city under their leadership will fall (24:1-19), and the son of man will receive the kingship (24:30-51).

When Jerusalem fell to Babylon, Ezekiel gave the same explanation. God was removing bad shepherds (Ezekiel 34:7-10), installing his Davidic king with a new covenant of peace (34:23-25). Ezekiel says God would judge between one sheep and another, and between rams and goats (34:17).

By the end of Matthew’s Gospel, Jesus has received this regal authority, but it’s bigger than Ezekiel imagined. Jesus is the son of David, but his kingship extends to all nations. And in his judicial wisdom, the king separates all the people of the earth into sheep and goats (25:32).

The nations had troubled Israel throughout the Old Testament, so the problems of God’s people could not be resolved unless God brought the nations under his control as well. Daniel 7 made that point: the rulers of the kingdoms of the earth were stripped of their power, and the son of man was given enduring dominion so that all nations and peoples of every language served him. Joel also declared that God would judge all the nations that opposed his reign, when his regal presence protected his people (Joel 3:12). And we’ve already seen Jesus alluding to the majestic arrival of the king in Zechariah 9–14. That passage concludes with God subduing the nations so the Lord is king over the whole earth (14:9), so the survivors from all the nations that have attacked Jerusalem will go up year after year to serve the King, the Lord Almighty (14:16).

In Jesus’ final teaching here in Matthew, he is the son of man receiving kingship over the whole earth. He is the king who judges between the peoples of the world, sorting out every injustice. That is earth’s greatest hope and scariest prospect.

The wise king instantly recognizes the difference between his subjects and his enemies, as clearly as a shepherd separating sheep from goats. His capacity to sort things out is as legendary as Solomon’s wisdom, the son of David who led a foreign king from the north to proclaim, “Praise be to the Lord today, for he has given David a wise son to rule over this great nation” (1 Kings 5:7). A queen from the south declared it too: “How blessed your people must be! … He has made you king to maintain justice and righteousness.” (1 Kings 10:8-9).

In our next post, we’ll discuss the basis of his judgement, how he distinguishes sheep from goats. This post is about the king of all the earth, the king of all kings, the king who removes evil from the world and restores the earth as a kingdom of heaven.

So, is his kingship over the earth already established? The answer depends on who you ask:

Matthew’s Gospel has often acknowledged the injustices in God’s world. Jesus’ servants are sheep among wolves, expecting to be arrested and hauled before those in power, betrayed by their own people, sometimes even facing execution for acknowledging the true king (Matthew 10:16-39). Now in the final chapters, Jesus himself will be betrayed by enemies among his own people, led like a sheep to the slaughter, crucified as the king of the Jews.

As we prepare for the horror of the cross, the final story of the Olivet Discourse assures us that the son of man does receive the kingship, that he knows how to deal with the goats. He is our God-appointed ruler, the hope of the world, the one leader who can and will restore justice to God’s earthly realm, the one king who will bring all nations under God’s reign.

25:31–46 is christologically rich. Jesus is the Son of man of Daniel 7. Angels belong to him. And he is destined to be the king and judge of the world. The confluence of these powerful christological facts, which recapitulate so much that has come before, provides the immediate background for the passion narrative and lends to that narrative great irony. Those who condemn and pass judgement upon Jesus know not what they do. The one whom they mock as ‘king of the Jews’ is destined to become the king of the world. It is not his fate that is in their hands but their fate that is in his.

The judgment scene is set in language largely drawn from Dan 7:13–14 and its wider setting. For similar imagery cf. 19:28. “The Son of Man,” “comes,” “glory” all directly echo those verses, as does the idea of enthronement. The specific term “throne,” the accompanying angels and the theme of judgment are all derived from the setting of the vision in Dan 7:9–10, but whereas the one who there sat on the heavenly throne among the angels was God himself, now it is the Son of Man whose enthronement, depicted in Dan 7:14, has now been achieved. When in v. 34 the Son of Man is described simply as “the king,” this is the culmination of the process throughout this gospel whereby the kingdom of God/heaven becomes embodied in the kingship of the Son of Man (13:41; 16:28; 19:28; cf. 20:21). In a passage so loaded with OT echoes it is also likely that the phrase “all the angels with him” echoes not only the imagery of Dan 7:10 but also the last clause of Zech 14:5, where very similar words depict the eschatological coming of God. In this climactic vision, then, the OT expectation of the eschatological visitation of God in judgment and salvation finds its fulfillment in Jesus the Son of Man who sits on his glorious throne and pronounces judgment.