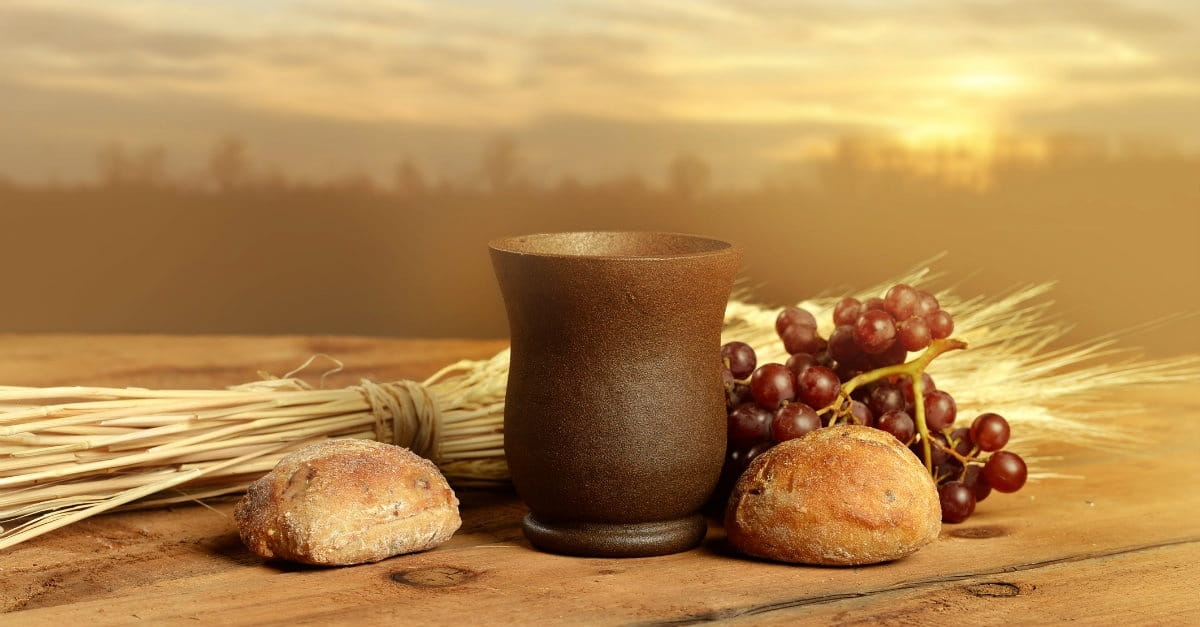 The phrase occurs only once in the NT, and it’s worth the effort to understand:

1 Corinthians 10 (NIV) 18 Consider the people of Israel: Do not those who eat the sacrifices participate in the altar? 19 Do I mean then that food sacrificed to an idol is anything, or that an idol is anything? 20 No, but the sacrifices of pagans are offered to demons, not to God, and I do not want you to be participants with demons. 21 You cannot drink the cup of the Lord and the cup of demons too; you cannot have a part in both the Lord’s table and the table of demons.

The vegetarian option seemed attractive to some Christians at Corinth, because the meat in their market had probably been offered to pagan gods. They asked Paul’s opinion (8:1). Paul says those gods are fakes so the meat’s okay, but consuming the meat sends the wrong message: friends and associates will see them as participants at the table of the false gods and the powers behind them.

In the ancient world, sacrifices were seen as food gifts for the gods. This didn’t start with the Sinai covenant: people offered food to gods long before Israel arrived on the scene, so that’s how Israel would have understood sacrifices too. Sacrifices are called food offerings more than 60 times in the Torah (NIV). At breakfast and dinnertime every day, they offered food to God — a burnt offering (ʿō·lāh) where the aroma rose up to God in the heavens.

The fellowship offering (zě·ḇǎḥ) had a double-purpose. It was partly burnt as a gift to God, but the priests were invited to eat it too. In doing so, the priests represented the covenant people sitting at YHWH’s table, in fellowship with him, participating in his food (what they had given him) and his provision (what he had given them).

Malachi 1 (NIV) 6 “Where is the respect due me?” says the Lord Almighty.
“It is you priests who show contempt for my name.
But you ask, ‘How have we shown contempt for your name?’
7 “By offering defiled food on my altar.
“But you ask, ‘How have we defiled you?’
“By saying that the Lord’s table is contemptible.
8 When you offer blind animals for sacrifice, is that not wrong? When you sacrifice lame or diseased animals, is that not wrong? Try offering them to your governor!” …
12 ‘The Lord’s table is defiled,’ and, ‘Its food is contemptible.’

The Lord’s table is the royal table, the place where his people participate in the covenant relationship with their king. They honour him with their gifts, gifts they can give because of their sovereign’s provision for them.

For Israel’s priests, the act of eating the fellowship offering at the Lord’s table held such significance: they were participating in the altar, along with God (1 Cor 10:18).

When Jesus made his final trip to Jerusalem, he planned to offer not the life of an animal but his own life. To establish a new covenant relationship between God as sovereign and humanity as the people of God, Jesus offered himself:

Luke 22 (NIV) 14 When the hour came, Jesus and his apostles reclined at the table. 15 And he said to them, “I have eagerly desired to eat this Passover with you before I suffer. 16 For I tell you, I will not eat it again until it finds fulfilment in the kingdom of God.” …
19 And he took bread, gave thanks and broke it, and gave it to them, saying, “This is my body given for you; do this in remembrance of me.”
20 In the same way, after the supper he took the cup, saying, “This cup is the new covenant in my blood, which is poured out for you.

They sat at his table, the Lord’s table. They offered him no sacrifice; their king was making provision for them. The gift he gave was himself: his body as the sacrifice gift, this blood as the libation to make peace between heaven and earth.

This remarkable offering established a new covenant between God and humanity. This covenant constitutes the people of the earth as the kingdom of God, the people under God’s kingship, through his anointed ruler (Jesus Christ our Lord).

That’s why we, today, gather around the Lord’s table. It’s the table of our king. In eating and drinking together, we participate in his provision for us to be at his table. We celebrate the king who gave everything for his people. We participate in his kingship, recognizing his kingdom, fellowshipping in the new covenant relationship between God and humans.

In coming to our Lord’s table, we proclaim the king who gave himself for his people, and we anticipate the day when his kingship shall be recognized throughout the earth.

[next: The Lord’s supper as imperial banquet?]

2 thoughts on “The Lord’s table: the Jewish background”