What country do you belong to? It depends on who’s your leader. 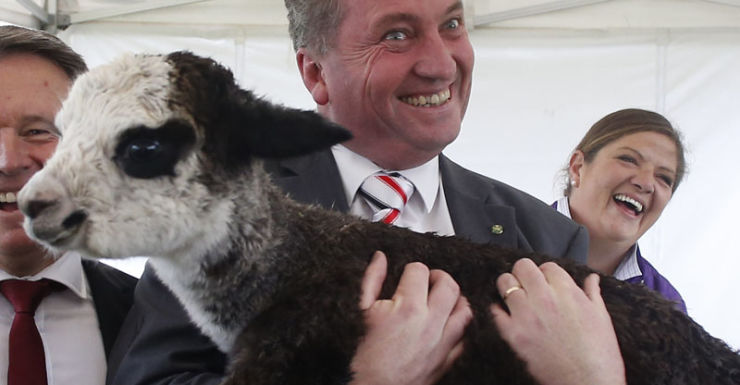 If John Clarke was still with us, he’d be having a field day. How do you bring down a democratic government? Demonstrate that many sitting members weren’t eligible to stand.

Now, politics is a serious business. Our leaders must have unquestionable allegiance to our nation. If war broke out, which side would a dual citizen support?

I mean, you couldn’t trust Barnaby Joyce as deputy prime minister if he’s secretly a Kiwi. If New Zealand invaded us, the haka alone would probably see him siding with the enemy. Well, that’s what the high court ruled anyway: they declared him unfit to be a sitting member, so he has to stand again.

And it’s not just Barnaby! There’s enough of those untrustworthy dual citizens in Canberra that it could undermine the coalition’s slender majority and bring down the government. Apparently you can be elected to the Senate with only 19 votes at the moment.

So, what about all the legislation these invalid pollies have signed into law? If the people who made our laws had no right to pass them, are the laws valid? Is the Aussie legal ship a big Swiss cheese? I mean, Barnaby’s been in Canberra for 12 years, and what: he’s collected a salary under false pretences all those years?  🙂

Okay, we shouldn’t have fun at Barnaby’s expense, especially now we’re not paying his expenses. Apparently he’s sorted out his allegiances now, so I wish him well for his re-election attempt on 2 December.

The irony is that people in politics take allegiances so seriously. A politician’s party must be their primary allegiance: above their business interests, above their family, above their personal opportunities. It’s been like that since well before Jesus’ time: remember the guys who tried to dig dirt on Daniel based on his higher allegiance (Daniel 6:4-5)?

Jesus expects that kind of primary allegiance from his followers too. The heavenly sovereign appointed Jesus as earth’s ruler, so allegiance to King Jesus is allegiance to God:

Jesus is the watershed of creation. He looks for your loyalty. Recognize his reign, and he recognizes you as a citizen of his kingdom. Refuse him as ruler, and he gives you what you want: exclusion from his kingdom. Your allegiance to him is your citizenship.

But please don’t read this as if Jesus was talking about individual salvation. Nothing could be further from the context of his remarks. “Just me and Jesus” doesn’t make a kingdom. Acknowledging Jesus places you in community with the other citizens who acknowledge him as king.

Faith in Jesus is more than believing he existed. The faith that saves is a responsive faith. It involves faithfulness, loyalty, giving allegiance. It begins by acknowledging Jesus’ kingship, confessing him, publicly owning up to being on his side. True faith finds expression in doing what the king commands: loving God (the heavenly sovereign) and people (who belong in his care). It’s not a private commitment: acknowledging Jesus as sovereign stamps you with OHMS (“on His Majesty’s service”).

Allegiance has serious consequences. So while our political leaders are checking theirs, check yours. What does your life say about your allegiance to earth’s king?

Jesus stands at the center of the message of the kingdom, not only announcing it but bringing it through his ministry of word and deed. In the final analysis, therefore, one’s relation to Jesus is all important. Relation to God is only possible through relation to him, and to reject him is in effect to reject God (cf. v 40).

We might compare Paul’s use of homologeō to the use of that same word in Luke’s Gospel. Jesus says, “Whoever acknowledges me before men, the Son of Man will also acknowledge him before the angels of God” (Luke 12:8; cf. Matt. 10:32). … What is essential for salvation? Public declaration that Jesus is Lord is at the bedrock, because this designates mental agreement with the gospel and the desire to live a life of personal fidelity to Jesus as the sovereign ruler of heaven and earth.

[previous: The kingdom is God with his creatures]

[next: How do you know God exists?]