How has the life of Abraham (Genesis 12–25) contributed to the narrative of the kingdom of God?

One hundred years Abraham has lived in Canaan. And what a life it’s been! Just as God promised, he became the father of many nations.

Did you know that Abraham had a third wife (25:1)? Keturah gave Abraham another six sons, and presumably daughters. This was probably after he divorced Hagar, but we don’t know if it was while Sarah was still alive. Keturah is a secondary wife (25:6, compare 1 Chronicles 1:32), so the motivation to send her sons away for Isaac’s sake could have been Sarah’s presence.

The narrator’s main point is the fulfilment of God’s promise that Abraham would be the father of a multitude of nations. Keturah’s sons become nations. When you read about the Midianites later in the OT story, remember that they were descendants of Abraham.

Ishmael’s offspring developed into an important ethnic group too, just as God had promised to Hagar (16:10-12) and to Abraham (17:20). The descendants of Ishmael became twelve tribes, just as Israel did. They settled in the rugged terrain south and east of Israel, ruled by twelve princes (25:12-18).

Nations and princes: this is a kingdom story. At the very core of the story of Abraham and Sarah was this amazing promise:

Among all these nations with all their kingly rulers, Abraham’s eulogy provides only a brief hint of the main achievement of his life:

Abraham’s legacy was tied up in this one prince, the unique son of Abraham and Sarah. Isaac fathered two nations: Edom and Israel (25:19-28). The divine sovereign affirms the primacy of Jacob (25:23). It was through Israel that the king of kings planned to establish his reign over all nations and all kings.

Abraham’s contribution to this story is over, but he is the most significant person so far. The narrator devoted far more space to him than to anyone else. Even his death notice is longer:

Genesis 25:7–8 (ESV)
These are the days of the years of Abraham’s life, 175 years. 8 Abraham breathed his last and died in a good old age, an old man and full of years, and was gathered to his people.

What a satisfying conclusion! Abraham laid the foundation for a nation that would ultimately restore God’s government of humanity.

His death and burial are now recorded, preceded and followed by genealogical lists of his descendants. Thus the entire cycle of Abrahamic traditions, which was preceded by a detailed list of Abraham’s ancestors, is encased within a framework of genealogies …

God promised that the patriarch would be “exceedingly numerous,” “the father of a multitude of nations,” “exceedingly fertile”; the genealogical lists specify how this was brought about. Abraham had been assured, “You shall go to your fathers in peace; / You shall be buried at a ripe old age.” Here it is affirmed that he died “at a good ripe age, old and contented” and that “he was gathered to his kin.” Previously God had declared that Isaac alone was to be the true heir of the covenant; here Isaac becomes the sole beneficiary of his father’s estate and, immediately following Abraham’s death, receives the divine blessing. …

By enveloping his note on the death of Abraham in genealogical lists, the Narrator demonstrates both God’s fidelity to His promises and his own personal perception of the history of the human race as the fulfillment of God’s purposes.

The death of Abraham is given its setting in the catalogue of families that sprang from him; such is the onward thrust of Genesis. Among these, true to pattern, those that were to play little part in the history of salvation make their bow first, to leave the chief actors in possession. 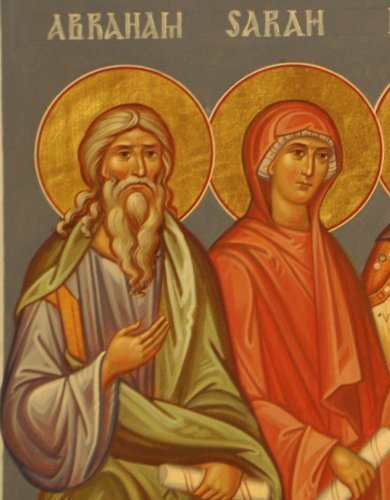