How would the story of Genesis 24 have felt from Rebekah’s point of view?

Rebekah is caught up in a romantic mystery beyond her wildest dreams. She’s a beautiful girl who has kept herself pure. A wealthy traveller has turned up in her corner of the world. After showing him hospitality, she learns he’s not really a stranger but the servant of a long-lost relative. Apparently Abraham has been very successful, and is seeking a suitable bride for his son who will inherit his good fortune. The guest showers her with expensive jewellery and dresses suitable for a princess. It’s all very sudden and unexpected, but it might be the opportunity of a lifetime. 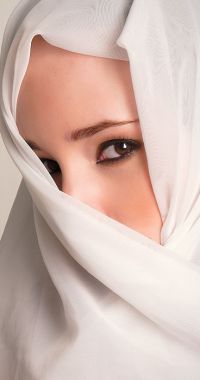 Her parents are listening to the stranger too. They’re piecing together enough of their family history to confirm his story. They listen as Uncle Abraham’s servant describes how he prayed very specifically, and Rebekah arrived on the scene at that very moment and he felt as if God had chosen her as the answer to his prayers. What they don’t know is that the opportunity being offered to their daughter makes her the princess of the kingdom of YHWH. This opportunity spirals her to such fame that 38 centuries later we’re still talking about her.

Rebekah makes her choice. She will risk everything, and see where this dream leads her. That’s when she discovers why this guy brought so many camels: the extras are for her and her attendant Deborah to ride back. Her family give her their blessing, a blessing that mirrors the promise of YHWH to Abraham in Genesis 22:17. She leaves everything she knows, and sets out for a new world. She takes the same journey Abraham took decades earlier, to the Promised Land.

They continue southward through Canaan. One day, this land will belong to her descendants. Finally they reach the southern reaches of the Negev, and the well where Hagar had seen the Living God. That’s when she sees him—a contemplative gentle man, but striking in a way you notice from a distance. It’s Isaac. She prepares herself to meet him.

Isaac has been waiting for this moment too. She learns to trust him, knowing she’s loved. Isaac is an emotional man. He still speaks tenderly of his mother Sarah even though she’s gone now. Rebekah becomes the love of his life, the princess of the kingdom.

In the years that follow, it will be Rebekah rather than Isaac who plays the primary role in this family.

By her generous hospitality and willingness to leave home in response to the Lord’s call, she showed herself to be both in faith and deed another Abraham. Her character inspires confidence that the next stage in the fulfillment of the divine purpose is in good hands. Even if Isaac should prove to be somewhat ineffectual, Rebekah, his new wife, will be equal to the call.

The family invokes a blessing for Rebekah (cf. 31:55), praying for her descendants to be plentiful and triumphant (cp. Ruth 4:11–12). The words “bless” (bārak) and “ten thousands” (rĕbābâ) probably are sound plays on the name Rebekah (ribqâ) …

The blessing recalls the promises made to Sarah, who will be the mother of nations (17:16), and Hagar, whose offspring will be uncountable (16:10; 21:13). The coupling of numerous descendants and national sovereignty echoes the angel’s promise to Abraham at Moriah. Laban’s blessing repeats virtually the same wording found in the promise (see comments on 22:17). By this and other inferences in the chapter, the author declares Rebekah the divinely chosen instrument who helps realize the promise made to Abraham and his descendants.

Having made the decision to go, Rebekah is given a special blessing by her mother and her brother (Gen. 24:60). Women in the Hebrew Bible almost never receive such blessings, making this one appear remarkable in itself, but more remarkable is the fact that NO other biblical woman receives a blessing from her mother (Frankel, 1996). Further, and perhaps even more noteworthy, Rebekah’s blessing exactly mirrors the blessing Abraham receives from Yahweh in Gen. 22:17 (Keck, ed., vol.1, 1994). In both cases the recipients are to have countless descendants who will overcome their foes. The blessing Rebekah receives here foreshadows the divine promise which is to come.