The Red Sea event proclaimed a definitive message: God made a way where there was no way — literally through the sea (14:21-23).

Even there, Egypt’s military power pursued them: “all Pharaoh’s horses and chariots and horsemen” (14:23). In ancient warfare, chariots were the equivalent of tanks: a protective, fast moving vehicle, able to outrun an enemy.

But the pathway God provided did not support chariots. They bogged down in the sandy sea floor. That’s when the Egyptians realized they were up against a foe they could not defeat: “Let’s get away from the Israelites! The Lord is fighting for them against Egypt.” (14:25).

When God’s people had passed through, Moses stretched out his hand again and the way through the sea closed. In this moment, the powerful chariots of Egypt’s mighty army become became junk on the sea floor.

Earth’s true ruler does have a way to release his world from the reign of evil and death. All the treacherous rulers and deadly weapons on earth cannot obstruct the purpose of the true sovereign, and his people.

The Red Sea event addresses the big justice question, “Can love defeat violence?” In YHWH versus Pharaoh, the power of love triumphs over the love of power.

The true ruler doesn’t need the power of an army to enforce his will. Nature itself responds to its true king. Even the sea. Even the uncontrolled places beyond human rule.

END_OF_DOCUMENT_TOKEN_TO_BE_REPLACED 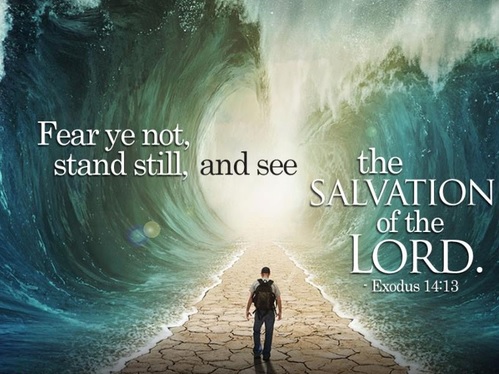 Who spoke these words? They’re not a promise from God. They’re from Moses’ mouth. In a difficult situation, Moses contradicted what God told the Israelites to do. That’s why he received this mild rebuke: END_OF_DOCUMENT_TOKEN_TO_BE_REPLACED

Freedom! The Israelites are no longer Pharaoh’s slaves. They’re marching out of Egypt with a new identity: the people of YHWH! Their king is present in cloud and fire. He leads them south towards the Sinai Peninsula. There they will discover his character, and covenant with him to be his people.

But … there’s a problem. See that dust rising into the northern sky? It’s gaining on them. At chariot speed. The Middle East’s most powerful army is coming to take them captive again. END_OF_DOCUMENT_TOKEN_TO_BE_REPLACED