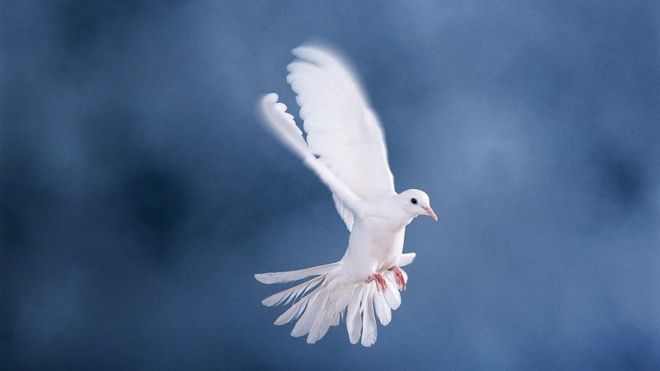 It was a day in 1945 my Mum remembered vividly. She was a teenager working in a pharmacy in Roma (Qld) when a great hullabaloo broke out. People were dancing and hugging in the streets. Cars honked, making jubilation laps in the street. Joy swept through the whole town at the news, “The war is over!”

We have a message that’s even greater. Jesus is the end of hostilities on earth!

Have you heard the good news?

When people refused divine governance (Genesis 3), the human community was fragmented by violence (Genesis 4). Kingdoms were built on war, kingdoms like Babylon and Assyria (Genesis 10:8-12). The reign of evil saw the nation that represented God being decimated by the kingdoms of the world.

Into this war-zone, Jesus came announcing good news: the restoration of God’s reign (Mark 1:15). But how was that possible? In the history of empires, the “baddest” beast wins. How could a Jewish prophet in an occupied land overpower the beasts? It would take an act of God for the kingdom to be taken from the beasts and given to someone who refused to gain power like that — someone more human, like a son of man (Daniel 7:13-14).

Mark 9 31 He said to them, “The Son of Man is going to be delivered into the hands of men. They will kill him, and after three days he will rise.”

What Jesus did was absorb the hostilities in his own being. Earth’s divinely appointed ruler (Christ) stands up in the face of the hostilities against God and against each other, taking the full weight and violence of human sin on himself.

The Gospels describe how the rulers of God’s fallen nation collude with the power of empire to be rid of “the king of the Jews.” Instead of fighting back, Jesus lodges a plea for reconciliation: “Father, forgive them: they do not realize what they’re doing” (Luke 23:34). His prayer is answered: he carries away in his own body the sin of the world, the world’s resistance to God’s governance.

That’s when God took the kingship from the beasts and gave it the human. God raised him up, defeating the power of death. No longer is earth longer ruled by evil (the power of sin). The eternal ruler gave the kingship to the son of man. With all authority in heaven and on earth, King Jesus calls the nations to follow him, their Commander-in-chief (Matthew 28:18-19).

Good news! The war is over! The Christ has ended the old divisions of one nation as “God’s people” and other nations as “not God’s people.” This is the end of hostilities. King Jesus is bringing people of all nations together into a unified humanity, in him.

Ephesians 2:11–22 (an interpretive translation, compare NIV)
11 So, remember how you who come from other nations were called “the uncircumcised” by those who call themselves “the circumcised” (since they see physical cutting as the marker of who’s in the covenant people). 12 Back then, you were not included in God’s anointed King. You were alienated from citizenship in Israel, foreigners to the covenant promise of divine kingship, outside the hope of God’s reign over the world. 13 But now, in King Jesus, you who were remote from all this became participants — through the slaughter of God’s anointed!

14 For he is our peace; forming a new union from both parties. In his physical person, he dismantled the hostility that divided humanity into covenant and non-covenant people. 15 God’s law and commands (the Sinai covenant decrees) exposed the division between the two groups, but King Jesus dismantled that division, creating one unified humanity out of the two human divisions. He did this in his own being: in his role as ruler of all people, he made peace.

16 In his own body, he completely reconciled both human groups by drawing them both together to God into one through his cross — within his own being, killing off the hostility. 17 Then he came back and announced the good news: peace for you who were remote, and peace for the ones who were near. 18 Through him, both groups are unified in one Spirit, so we have access to the Father.

19 That means you non-Jews are no longer foreigners and aliens but equal citizens, included in the holy people, with a place in God’s households, 20 the households built upon the founding work of the apostles (appointed by Jesus) and the prophets (who previously announced the word of the Lord), King Jesus being the crucial building block where the whole thing comes together. 21 In him, the whole building is being assembled as it develops into the Lord’s holy temple-residence, 22 with you all being co-assembled into God’s dwelling-place by the Spirit.

Time for dancing in the streets?