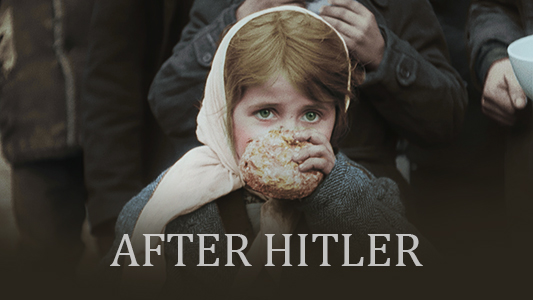 What’s wrong with the world? What must God resolve to establish his kingdom with Jesus as ruler?

In the five years that separated the end of the Second World War from the start of the Cold War, the world had hoped for a lasting peace, but instead found itself on the brink of apocalypse. Five years of chaos and hope for the people of a shattered Europe, who became pawns in the games of the major powers.

History keeps repeating. When people rise up against an oppressive ruler, the person who comes to power can turn out to be even more monstrous. How can we ever be delivered?

The night before his crucifixion, Jesus made the most extraordinary claim:

John 16:33 (my translation)
I’ve told you these things so that, in me, you may have peace. In the world you have oppression; but take courage: I have conquered the world!

According to Jesus, the trouble with the world is that it has oppression (thlipsis) instead of peace. But he makes the outlandish claim to have conquered this oppressed world. The verb is nikaō — to conquer, be a victor, vanquish one’s enemies.

To think of Jesus merely as a spiritual saviour is to miss the impact of what he said. He claimed to have overthrown the powers that cause oppression in this world. He saw himself as defeating the ruler of this world, judging the existing powers so as to restore God’s justice to the oppressed world:

Since the world’s powers are under the control of evil, Jesus knew they would conspire to get rid of him. He knew they would interrupt this conversation with his disciples. But even if they killed him, his authority would stand, for it’s from a higher power:

John 14 30 I will no longer talk much with you, for the ruler of this world is coming. He has no claim on me, 31 but I do as the Father has commanded me, so that the world may know that I love the Father.

John 18 36 “If my kingdom were of this world, my servants would have been fighting … But my kingdom is not from the world.” 37 Then Pilate said to him, “So you are a king?” Jesus answered, “You say that I am a king. For this purpose I was born and for this purpose I have come into the world—to bear witness to the truth.”

The central theme of John 12 – 20 is this ultimate battle for kingship of the world. John depicts Caesar’s representative as a powerless pawn in the hands of evil. Pilate knows Jesus is innocent, but he’s powerless to resist the evil that must be rid of “the king of the Jews” (John 19:10-16).

This is the strangest battle in world history. Surely Jesus’ death at the hands of evil is the ultimate injustice. But his defeat lasts less than three days.

The heavenly sovereign who reigns over the earth intervenes in the history of his oppressed realm. He overturns the power of evil and the accompanying power of death — the very tools by which the rulers of this world gain and maintain their oppressive power. God raises up his Son as ruler over the earth. Our anointed king comes back to us, having defeated the ruler of this world, bearing the authority of his Father, the one who has always been earth’s sovereign.

This is how Jesus conquered the world, and it’s good news for all oppressed people.

Perhaps we should tell the gospel story the way John does:

We’ll talk further about how we do this, but here’s a hint:

John 20 21 Jesus said to them again, “Peace be with you. As the Father has sent me, even so I am sending you.”

Tom Thatcher, “‘I Have Conquered the World’: The Death of Jesus and the End of Empire in the Gospel of John,” in Empire in the New Testament, (Eugene, OR: Pickwick Publications, 2011), 140:

While the New Testament authors deal with the scandal of the cross in a variety of ways, John’s response is notable for its complete reversal of everything that crucifixion represents. Indeed, in the Fourth Gospel the normal public meaning of the cross is profaned in a way that makes Caesar and his agents helpless victims of the Christ who conquered the world (John 16:33).

2 thoughts on “How Jesus overcomes the world’s power problem”