If you don’t understand who your enemy is, you fight the wrong people. 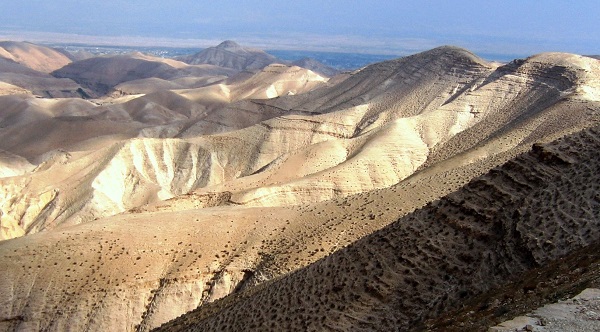 Why on earth would the Holy Spirit lead Jesus out into the wilderness to be tempted by the devil?

Grand Designs (TV series) told the story of a chap who wanted to use renewable resources to build a house that blended into its rural setting. No one had built from the local timber, so they weren’t sure of how it would bear up. Before he could build, engineers tested samples of the timber to make sure the house would stand.

Enormous power was resting on Jesus. The heavenly sovereign proclaimed him as his son, the divinely appointed ruler of humanity. The Spirit visibly descended on him, anointing him with power to rule. In the history of the world, no human being has borne such power without being corrupted. Jesus must face the test of how he will use his power. The Spirit leads him to face his opponent. Alone. In the wilderness. Before the public battle begins.

But who is his enemy? Jesus’ contemporaries would have given a variety of answers to this question. For zealots, the enemy was Rome: they wanted to fight the Romans so Israel could be under God’s rule again. The Sadducees thought that was crazy: they negotiated with their Roman overlords for the best outcome they could get for the Jewish people. The Essences considered these ruling priests as the enemy: they were ready to fight these “sons of darkness” as soon as God sent the leader for the final battle. The Pharisees treated “the sinners” as the enemy: they wanted to ostracize these Law-breakers so that God would restore his nation.

But for Jesus, flesh-and-blood people were not not the enemy. There was a power behind the powers. It was something Judaism had only begun to understand. Over the centuries, Israel had faced so many enemies it’s a wonder they ever survived: Canaanites, Moabites, Midianites, Edomites, Arameans, Philistines, … Then Assyria and Babylon took them down. That’s when they began to realize that their enemy was not merely these empires, but the power that drove the empires to crush and conquer humanity.

Behind the King of Tyre, Ezekiel saw the same force that drove the original rebellion against God’s reign in Eden (Ezekiel 28). Behind Babylon’s drive to take over the whole world Isaiah saw the same rebelliousness (Isaiah 14). Then Persia invaded Babylon, and Greece invaded Persia, and God’s people began to recognize the rebellious force driving empires to resist God’s reign: the “prince of Persia” and the “prince of Greece” (Daniel 10:13, 20).

They gave names to this power: ha satan the adversary prosecuting the case for their demise (e.g. Job 1; Zechariah 3), mastema the hater (Hosea 9:8-9), belial the lawless (Jubilees). Matthew calls this power diabolos the slanderer (4:1). Jesus used the Hebrew word satan for his adversary (4:10).

So the battle begins. The Spirit leads him into the wilderness. The wilderness is beyond the control of Roman soldiers or temple priests. When Moses freed Israel from Pharaoh’s control, the Spirit led them in cloud and fire … into the wilderness. There God sustained them with manna. There he established them as his nation, receiving his Law. There the cloud of his presence entered the tent they built for him, so they were a nation led by God.

So Jesus is here. In the wilderness. To fight where Israel failed. The Spirit led him here. He has the ultimate enemy in his sights.  Israel’s champion is tested. For everyone’s sake, he must not fail.

In this narrative Matthew presents Jesus as Israel’s—and Jesus’ followers’—champion, the one who succeeded in the wilderness where Israel had failed. …

Further, the Spirit, having empowered Jesus for his mission as God’s Son (3:16–17), now is the one who leads him into the wilderness where his call must be tested (4:1, 3, 6). Matthew expressly informs his audience that the purpose of the Spirit’s first leading of God’s Son was that he might be tested. Matthew’s audience might infer two primary lessons from this narrative. First, the narrative presents Jesus as the vicarious advocate for his people, relinquishing his own power for his mission to save them from their sins.

But second, no less than Matthew’s discourse sections (28:19), this narrative provides a model for them (6:13), for Jewish teachers instructed by example as well as by word. Jesus had to be tested and overcome the tester before he could do anything else (cf. Schlier 1961: 40). Disciples are destined for testing (6:13; 26:41), but Jesus their forerunner has gone before them and shown them how to overcome.

Note that Jesus is led by the Spirit into the desert. Times of testing (and that is the meaning of the Greek peirazō in this context) come from the Lord in order to strengthen and help. In the entire episode, Jesus is being put to the test. Will he, like Israel of old, disobey, or will he prove himself worthy of the messianic task assigned to him? As the author of Hebrews tells us, “Although he was a son, he learned obedience from what he suffered” (Heb. 5:8).

[previous: What is baptism with the Holy Spirit?]